Since 1977, I have written more than 300 000 kilometers of words, that is to say put end to end, one way trip from Earth to the Moon. Or a second to light for this trip. A second light words in 30 years, some 3 billion signs.

Posted by Jackinthebooks at 12:37 AM No comments:

A boy is neglected as a child by his family and becomes a dangerous and ruthless criminal.

In 1958, Mohamed Osfour, a self-taught man familiar with all cinema techniques due to his numerous contributions to international productions shot in Morocco, was to live his dream: to show the Moroccan people of the theatres of Casablanca his first feature, “Le Fils Maudit. A personal work completed after few shorts parodying the great genres of cinema. Mohamed Osfour’s Les fils maudit today is considered the first full-length fiction movie of post-independent Morocco. 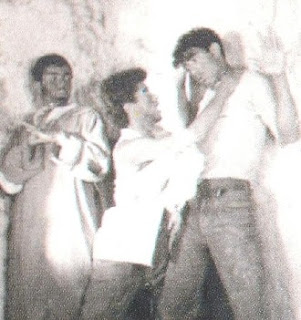 Posted by Jackinthebooks at 11:43 PM No comments: 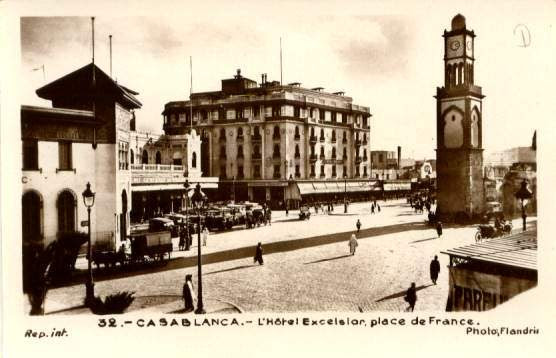 For a long time after its inception, Moroccan cinema was defined as anything filmed in Morocco, from cameramen sent by Les Freres Lumieres to the stammerings of young filmmakers. Gabriel Veyre, one of the first filmmakers in Morocco, documented the country at the beginning of the 20th century and became the official photographer and filmmaker appointed by the Sultan of Morocco.
Until the end of the 1950s, films produced in Morocco were used as a vehicle for French colonial ideology: Moroccans were represented as non-civilised barbarians.
In 1944, the French Protectorate established the Moroccan Cinematographic Centre (MCC), imitating the model of the French National Centre of Cinematography. In the same year, Moroccan resistance intensified. On January 11th 1944, the Independence Manifesto was released. The MCC was entrusted to the army’s Henri Monjeau, who also became the director of the General Resident Press Service.
Starting from that date, colonial films were distributed as Moroccan even though the French produced them. Most of these were dull imitations of Egyptian melodramas or adaptations of pop culture classics.
Starting from the 1940s, young Moroccans started to make films on a shoestring budget outside the framework of the MCC. Among them – and he can probably be regarded as the first Moroccan filmmaker – was Mohamed Osfour (who died in December 2005). Most of his short films were shot around the peripheries of Casablanca using a 9mm camera, no script, and amateur actors. The Osfour films, essentially designed for coffee shop clients, presented Tarzan and Charlot (The Son of the Jungle and Charlot Moroccan) as Moroccan figures, and are considered as an organic part of the fairground tradition in cinema.
The 1980s, and more so the 1990s, saw the production of some great popular hits, such as A Love in Casablanca (Un amour a Casablanca, 1991) by Abdelkader Lagtaa, Searching for my Wife’s Husband (A la recherche du mari de ma femme, 1993) by Mohamed Abderrahmane Tazi, and Women and Women (Femmes et femmes, 1998) by Saad Chraibi. But these decades also mark the appearance and proliferation of the satellite dish on rooftops; through TV channels, the visual culture of the West and Middle East flooded Moroccan homes.
The 1990s also witnessed the demise of movie theatres. Those that stayed open predominantly projected big American productions, largely in competition with Bollywood films consumed via satellite. Starting from 2000, pirated copies of VCDs or DivX accelerated the closing down of movie theatres across the country, even though Morocco was considered as one of the largest cine-club networks in this part of the world.
We had to wait until the end of the 1990s for the Moroccan public to become reconciled with its own cinema. The new scene played a role in enabling the film directors making the art-house cinema of the 1970s to coexist with a young generation living mostly between two countries, or exclusively in the diaspora.

Irremediably marked by exile, either outside or inside, the recent revival of Moroccan cinema deals with displacement and mobility, the permanent back and forth. Proof of this condition is found in: Mektoub (1997) and Ali Zaoua, Prince of the Streets (Ali Zaoua: Prince de la rue, 2001) by Nabil Ayouch, The Horse of the Wind (Le cheval de vent, 2001) and Tarfaya (2004) by Daoud Oulad Syad, One Thousand Months (Mille mois, 2003) by Fawzi Bensaïdi, Dry Eyes (Les yeux secs, 2003) by Narjiss Nejjar, The Big Trip (Le grand voyage, 2004) by Ismaël Ferroukhi, Tenja (2004) by Hassan Legzouli, The Sleeping Child (L'enfant endormi, 2004) by Yassmine Kassari, The Alarm-Clock (Le réveil, 2004) by Mohamed Zineddaine, In Casablanca Angels Don’t Fly (À Casablanca, les anges ne volent pas, 2004) by Mohamed Asli, The Black Room (La chambre noire, 2004) by Hassan Benjelloun, The Moroccan Symphony (La symphonie Marocaine, 2005) by Kamal Kama, Marock by Leila Marrakchi (2005) and Casanegra (2008) by Nourredine Lakhmari.
The majority of these directors started their career by making short films, many of which were very successful. These included: Ochre Memory (Mémoire ocre, 1991) and Al Oued (1995) by Daoud Oulad Syad, The Blue Stones of the Desert (Les pierres bleues du désert, 1992) and The Seller of Silence (Le vendeur de silence, 1994) by Nabil Ayouch, The Exposé (L’exposé, 1993) by Ismaël Ferroukhi, Born without Skis (Né sans skis aux pieds, 1996) by Nourredine Lakhmari, The Cliff (La falaise, 1998) by Fawzi Bensaïdi, When The Sun Makes the Birds Fall Down (Quand le soleil fait tomber les oiseaux, 1999) by Hassan Legzouli, Salam by Souad El Bouhati (1999), and 200 Dirhams (2002) by Leïla Marrakchi.
Such dynamic national film production would not be possible without the will and action of the public sector, since the Aid Fund for Moroccan Filmmaking (modelled on Avance of France) supports the production of 10 to 15 feature length films every year.
Since 2000, a significant number of foreign shoots and the opening-up of the Moroccan audiovisual scene (especially with the production of TV movies and the establishment of thematic channels) enabled the creation of production and post-production companies, but also cinema and audiovisual schools.
After Noureddine Said became head of the MCC, there was a boom in the number of short films produced – reaching more than one hundred annually. This rise was accompanied by the creation of many festivals around the country broadcasting these films, such as the Mediterranean Short Film Festival of Tangier.
Nevertheless an exponential increase in production is not necessarily a guarantee of quality. In Morocco, to apply for syndication (which gives individuals the right to the status of filmmaker) young directors are required to have directed three short films. Such a system has effectively raised questions about the format of short films: do they express a vision of the world and of society, or are they simply a passport towards the professional world?
When it becomes a true aesthetic lab, a practice of short films authorises the convening of genres, styles and approaches underrepresented in Moroccan cinema: the documentary, the art film, experimental films, and the navigation between two or even more aesthetic movements. This openness towards heterogeneous practices and positions is evidence of a desire to consider cinema with all its possibilities, and at the same time of a will to experiment with and enlarge its borders.
That was specially the case with the work of Fatima Jebbli Ouazzani in In my Father’s House (Dans la maison de mon père, 1995), Yasmine Kassari in When Men Cry (Quand les hommes pleurent, 2001), Ali Essafi in Ouarzazate Movie (2001) and Le blues des Sheikhates (2004), Leila Kilani in Tangier, The Dream of the Burners (Tanger, le rêve des brûleurs, 2002), Hakim Belabbes in The Fibres of the Soul (Les fibres de l'ame, 2003), Kamal El Mahouti in My Lost Home (Ma maison perdue, 2002), Dalila Ennadre in Woman of the Medina (Femmes de la médina, 2002) and Brahim Fritah in The Lonely Woman (La femme seule, 2004).
All these stories reveal once again a return to the origins of Moroccan cinema: a cinema marked by restless wandering, displacement and immigration. But what forms the specificity of today’s Moroccan cinema is that it has crossed its own borders to be a part of a circular nomadism on two sides of the Mediterranean. If Moroccan cinema was born in modernism (because it was organically a part of post-colonial and avant-garde cinematography), its revival went through a redefinition of the basis of this same modernity: a cinema of the border, of the gap and of the intervening period.

Jerry Cornelius is a fictional secret agent and adventurer created by science fiction / fantasy author Michael Moorcock. Cornelius is a hipster of ambiguous and occasionally polymorphous sexuality. Many of the same characters feature in each of several Cornelius books, though the individual books have little connection with one another, having a more metafictional than causal relationship. The first Jerry Cornelius book, The Final Programme was made into a 1973 film starring Jon Finch and Jenny Runacre. Notting Hill in London features prominently in the stories.
The series draws plot elements from Moorcock's Elric series, as well as the Commedia dell'Arte. Moorcock hints in many places that Cornelius may be an aspect of the Eternal Champion. Characters from the Cornelius novels show up in much of Moorcock's other fiction: "The Dancers at the End of Time" series has a character called Jherek Carnelian who is the son of Lord Jagged of Canaria, and there are several hints in the series that Lord Jagged may be a guise of Jerry Cornelius; the Cornelius-series character Una Persson also appears in the "Dancers" series and the Oswald Bastable books, and may also be the character Oona in the later Elric books; Colonel Pyat has his own non-SF series of books by Moorcock, beginning with Byzantium Endures.
At least five other variants of the name occur in other Moorcock works (Jerry Cornell, Jehamiah Cohnalias, Jhary-a-Conel [Corum, Runestaff], Lord Jagged of Canaria from The Dancers at the End of Time, and the anagrammatic Corum Jhaelen Irsei). A space pirate named Captain Cornelius (who like Jerry is associated with the commedia dell'arte character Pierrot) appears in Moorcock's Doctor Who novel, The Coming of the Terraphiles. 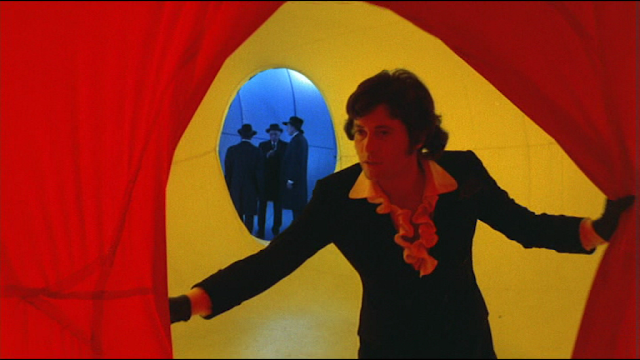 Posted by Jackinthebooks at 11:56 AM No comments:

Email ThisBlogThis!Share to TwitterShare to FacebookShare to Pinterest
Labels: secret agent-science fiction-doctor who- 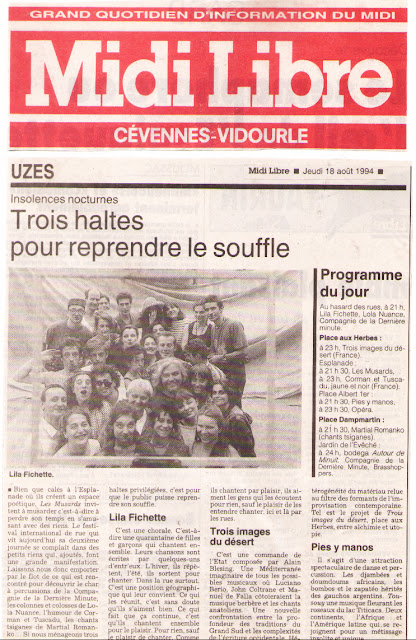 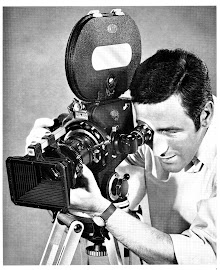 Jacques is a real man, very talented, honets, with a a young and very original and unique spirit, who can always get you exactly what you wanted and even have not thougth about it."
He is a true artist, in every sense of the word. What makes him special is that his natural talent combines with a very original and unique spirit. Jacques always comes up with the goods, getting you exactly what you want -- even if you haven't thought about it yourself! Last but not least, he's a very honest and dependable gentleman.
He is a multi-talented artist, who revived through "Jack in the books" old universes where forgotten heros are brought back to life.”

He is a creative person working in painting, collage film and communication. Everything he does is new and original. It is exciting to work with him and be with him. I would recommend him to anyone seeking a fresh and original approach to design and art.

Jacques Fhima for many years take part in many events organized around the screening of old movies and video art. Jacques has a vast knowledge and an amazing treasure in all what is connected to the history of cinema, comics and related subjects. Working with him involved discovering astounding pieces of these forgotten and rare treasures. Additionally Jacques is always ready to help and you can surely count on his sense of responsibility. I would recommend him for any artistic task.

“A true renaissance man and original artist. his canvas are the streets walks in and the people he interacts in. A Dadaist in the full sense of the word.A filmmaker a notch above the rest.” 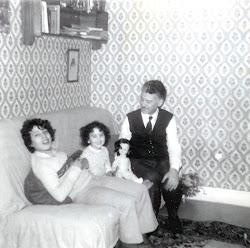 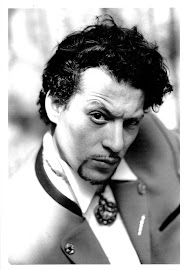 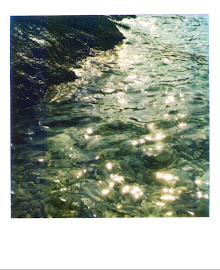 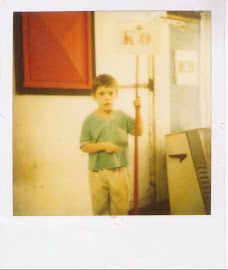 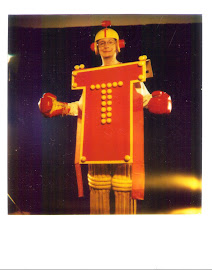 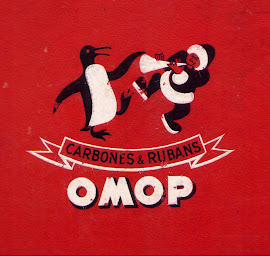